No Result
View All Result

by Social Voices
in Education
0

Fellows during a group practice at the Code Plateau Campus in Jos Photo: PICTDA

After completing her compulsory National Youth Service Corps (NYSC) service year in 2018, Sandra Mahannan worked at an Abuja-based company for a year. However, she lost her in 2020 job due to the COVID pandemic. Mahannan returned to Jos where she volunteered as a radio producer at a local radio station in Jos, Plateau state before quitting to be part of Code Plateau, a decision she describes as a “life-changing” moment.

Code Plateau is an eight months onsite fellowship designed to equip young Nigerians (especially residents of Plateau) with digital skills such as digital marketing, software engineering, UI/UX design, and data science for free. The fellowship was launched in 2019 by the Plateau State Information and Communication Technology Development Agency (PICTDA).

With a zero background in data science and any other digital skills aside from basic computer literacy,  Mahannan applied for Code Plateau after her friend shared the opportunity with her. At the end of the training, PICTDA facilitated an internship programme for her at an Abuja-based tech company, Data Lead Africa where she worked as a Data Science intern.

After the three months internship, Mahannan was retained as a full-time staff at the company. The initiative was designed to enable human capital development and job placement. “The training was intensive and it provided me with the relevant skill set that enabled me to be retained as a staff,” she said.

Unemployment continues to be one of Nigeria’s most burning macroeconomic challenges. The unemployment rate in Nigeria rose to 33.3% in the fourth quarter of 2021, according to a report published by the National Bureau of Statistics. That’s up from 27.1% in the second quarter of 2020, the last period for which the agency released employment statistics. 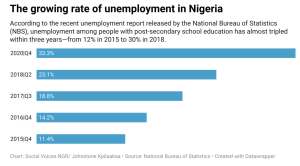 “When the Director General of PICTDA came on board in 2019, he figured out that to build a strong ecosystem, you need to invest in human capital development. That is why we started Code Plateau to equip young people with relevant tech skills for the fourth industrial revolution,” Ponfa Miri, the Project Coordinator of Code Plateau told Social Voices.

According to the World Economic Forum, the Fourth Industrial Revolution could lead to 75 million job losses by 2025. But, it could also create 133 million jobs, thus leaving a balance of 58 million jobs.

With global trends shifting towards technology, experts estimate that Nigeria’s digital sector could add $88 billion and three million jobs to the economy by 2027. The Nigerian government through the National Digital Economy Policy and Strategy (NDEPS) [pdf], which is being implemented by different agencies of the government, including the Nigerian Communications Commission (NCC), wants to achieve 95% digital literacy in Nigeria by 2030.

The policy aims to equip young people with the necessary skills required to get decent jobs while transforming Nigeria into a leading digital economy. Although it is unclear how far this policy has been implemented, Microsoft recently signed a memorandum of understanding with the Nigerian government to train five million Nigerians in line with the aforementioned policy.

Beneficiaries are giving back to Code Plateau and society.

Since its launch in 2019, Code Plateau has trained over 1000 young people across four cohorts in the Plateau State—and others from neighbouring States. The programme which is currently admitting its fifth cohort didn’t hold in 2020 due to the COVID-19 pandemic.

“Although we have trained a large number of people, we can only account for about 100 of them that have either gotten jobs independently or were retained after their internship experience,” Ponfa said. “This is majorly because some of the participants show more commitment than others.”

Even though most of the graduates from the program have gone on to work for other companies, some have returned to serve as trainers at Code Plateau. “Although I learnt software development during my fellowship, my experience from the programme inspired me to upskill, so I went ahead and learned data science,” Mandieng Bot told Social Voices.

Code Plateau recently introduced a data science track because of Bot. “I hope to play my role in community building by training the next generation of data science and machine learning professionals in Plateau state,” he said. Mahannan is one of the many students Bot has been able to train since he returned to Code Plateau as a trainer.

Like Bot, during her internship at Data Lead Africa, Mahannan, who is a graduate of Special Education and Rehabilitation Science at the University of Jos organised a three-day training exercise to teach Microsoft Excel to people with hearing disabilities: “This is the one time I have ever felt like the course I studied in the university was relevant and can cause positive change in society,” she said. During the first edition in August 2022, Sandra trained about 22 deaf persons. Currently, she and her team at Data Lead Africa with support from GIZ intend to train 30 more deaf persons before the end of the year.

The struggle for continuity and brain drain

Since most government initiatives are tenure based, the question about the continuity of Code Plateau after the current administration has been asked on several occasions. David Daser, the Director General of PICTDA previously said that the agency intends to partner with private players in the Plateau state ecosystem to foster continuity of the programme after the Simon Lalong administration which will end in early 2023.

According to Ponfa Miri, the Project Coordinator of Code Plateau, “We are currently trying to facilitate a partnership with a youth-led non-profit organisation that will be able to oversee the implementation of the project even if the next administration is not interested in it.”

At the commencement of the program in 2019, PICTDA partnered with Jos-based tech companies for the pilot implementation. However, due to a lack of funds, the partnership was short-lived. Ponfa said, “Most of the partners are business minded, so since the fellowship was not generating revenue, it was difficult to keep them on the project. That is why we are exploring a partnership with a non-profit organisation that is passionate about human capital development.”

Although the program is backed by the Plateau state government, most of the funding is either through bootstrapping or donations. In March 2022, the government rented a multi-million facility that is used as the Code Plateau experimental campus; the campus houses lecture rooms, co-working spaces, offices, restaurants, a games arena, and relaxation spots. Before this facility, the fellows used the premises of a private company in the metropolis for their activities.

“It was quite challenging trying to squat the fellows at this facilities, sometimes our activities were clashing with those of our host. It was inconveniencing, we needed our space,” Ponfa added. “Right now, other challenges that we are facing here include an internet facility, and power—we need a solar system for consistent power supply. Also, some of the students don’t have access to gadgets”

Aside from the aforementioned, brain drain is another challenge that has been faced since the implementation of the project. Since the Northern Nigerian tech ecosystem is still in its budding stage, most of these fellows are sent outside of Plateau State for internships, like Mahannan most of them are retained by these companies that are usually based in Lagos and Abuja, which in someway defeats the goal of the “human capital development for Plateau plan”

To curb this, PICTDA created a sub-initiative under Code Plateau tagged “Code for Plateau”, through this initiative, fellows are retained to work in ministries, departments, and agencies in the State.

PICTDA intends to replicate the success of Code Plateau across the other 16 rural local government communities in the state.

“We previously partnered with the Qur’an Pan local government council to set up an innovation hub but it was not sustainable,” Ponfa told Social Voices that through a yet-to-be-launched initiative; Code Plateau on Wheels, the program will be gradually extended to these communities.

This story was produced in partnership with Nigeria Health Watch through the Solutions Journalism Network, a nonprofit organisation dedicated to rigorous and compelling reporting about responses to social problems.

Insurgency is pulling children away from school, but an NGO is giving them a chance at education

By Promise Eze WASSA, ABUJA:  One evening in May 2017, suspected jihadists numbering over 20 and with military grade machine...

An initiative is helping underprivileged children succeed in classrooms

By: Mohammed Taoheed Goodness Akwesa, was about 11 when she was enrolled in Central Epia Secondary School Opolo, a public...

By Nanji Nandang Nanfe Dashe, originally intended to become an aeronautical engineer but she developed a desire to learn more...

by Mujeeb Abdulwasiu Shaman Adewara was 9 when he completed a three-week summer boot camp, organized by KidsThatCode (KTC) initiative....

This site uses Akismet to reduce spam. Learn how your comment data is processed.

Mitigating internal displacement, one skilled woman at a time

Insurgency is pulling children away from school, but an NGO is giving them a chance at education

An initiative is helping underprivileged children succeed in classrooms

Shey you sabi? The project sabi initiative engaging with men to curb GBV

No Result
View All Result